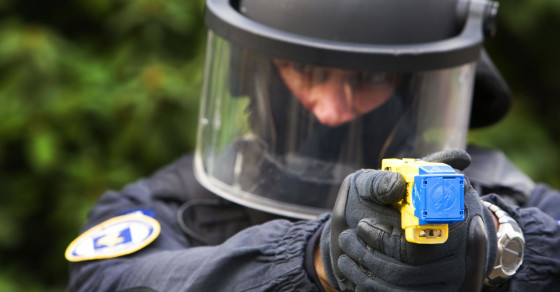 Law Enforcement Agencies Use Tasers Over 300,000 Times A Year
By Sarah Kaufman

Law Enforcement Agencies Use Tasers Over 300,000 Times A Year

The numbers behind the Taser debate

The use of a Taser in the fatal shooting of a black man by a cop in South Carolina earlier this year has reignited a debate about how safe they are and whether police are relying too heavily on them. Many people, especially residents of North Charleston, S.C., where the shooting occurred, have expressed concern that Tasers pose a health risk to some who are involved in run-ins with police.

Officer Michael T. Slager of the North Charleston Police Department fatally shot Walter L. Scott on April 4 in North Charleston. The incident was recorded on tape by a bystander, and the officer’s use of a Taser was documented as well.

Here’s a look at some of the numbers behind the raging debate over Tasers:

Slager had used his Taser 14 times in five years

The record shows Slager was no stranger to the Taser’s electrical charge, The New York Times reported. He used his Taser six times in 2014 alone, according to police documents. That’s four percent of the department’s total Taser use.

That means the department, on average, performed 206 tasings per year. For comparison, The New York Times offered Tyler, Texas, a town similar in population but with 150 fewer police officers. Tyler’s department used Tasers 65 times in the same time period, or roughly only 30 percent of the tasings that occurred in North Charleston.

Over 18,000 law enforcement agencies have Tasers

The weapon is highly prevalent, according to Taser International. But there is no publicly available national standard for law enforcement in using one.

Tasers are used 900 times a day

Taking that data from Taser International and assuming every day is relatively consistent in Taser usage, that’s 328,500 tasings a year.

Tasers have been blamed for over 500 deaths

While Taser International says it has conducted independent studies to verify the weapon’s safety, some medical experts say the electric jolts can pose sometimes fatal threats to a person’s health. According to Amnesty International, Tasers are responsible for at least 500 deaths.