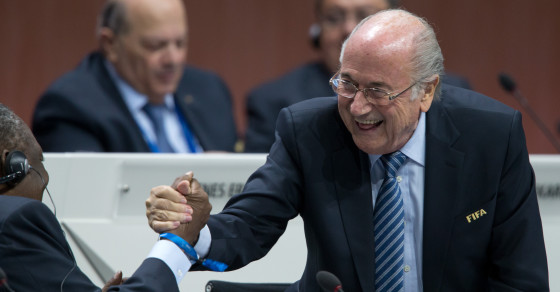 What Do FIFA, Zimbabwe And North Korea Have In Common?
By Abigail Tracy

What Do FIFA, Zimbabwe And North Korea Have In Common?

Their presidents never have to fight for re-election

UPDATE: FIFA Presidnt Sepp Blatter won a fifth term after his opponent Prince Ali Bin Al-Hussein dropped out of the race before the second round of voting.

Zimbabwe had Robert Mugabe, North Korea had Kim Jung Il — and FIFA has had Sepp Blatter and Joao Havelange. What do they have in common? None has ever really had to fight for re-election.

On Friday, amid one of the biggest scandals in FIFA history, the 209 federation members that make up the massive FIFA organization vote on whether Blatter will win a fifth term as president. Blatter is going against Prince Ali Bin Al-Hussein of Jordan, and almost everyone expects him to triumph yet again.

There’s a good reason for their optimism. FIFA has behaved more like a dictatorship than anything else, according to a history compiled by Reuters. Since its founding in 1904, the soccer governing organization has only had eight presidents. Of the first six, three died in office, one basically grew sick of the role and handed off the reins, and the remaining two—Jules Rimet and Stanley Rous—held the position for 33 years and 13 years, respectively.

Since Havelange was elected president in 1974, there have been a mere two presidents— Havelange, who was never challenged during for the presidency duyring his 24 years, and Blatter, who has been in office 17 years. Three people ahve challenged him during that time, but two of dropped out before the final vote. In sum: he’s only faced one real election until today.