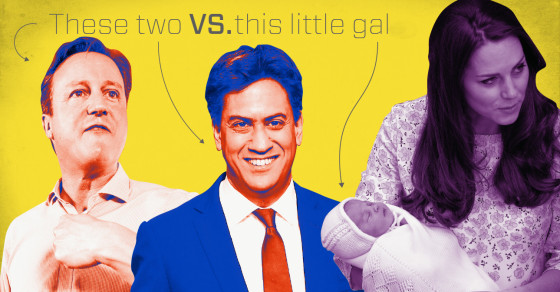 God Save The Queen: Social Frenzy Over UK Election Bigger Than Royal Baby

By midnight, just under 10,000 geotagged posts surfaced with the hashtag #GE2015

Britain’s high stakes general election triggered a social media frenzy that made even the birth of Princess Charlotte pale by comparison.

British voters flocked to polls around the country beginning at 7 a.m. on Thursday and took to Twitter in anticipation of one of the most closely watched races in recent memory. They used the hashtag #ge2015 to track the results, which, among other things, will have an impact on Britain’s relationship with the European Union, shape the future of Scotland, and determine the role that England seeks to play on the world stage.

By midnight local time, 17 hours later, just under 10,000 geotagged posts with the hashtag #ge2015 surfaced in the United Kingdom, according to an analysis by Vocativ.

Now compare the response to the British election to the birth of Kate Middleton and Prince William’s second child, Princess Charlotte Elizabeth Diana of Cambridge, earlier this week, which people in the U.K. followed with the hashtag #royalbaby. Vocativ found that in the 17 hours after the news broke there were only 5,000 #royalbaby posts geotagged across the country.

Both the #geo2015 and #royalbaby hashtags were used in hundreds of thousands of additional posts. But because they were not geotagged, their precise location could not be determined.

Genuine concern for their country seemed to prevail among British voters on Thursday, but their interest in the election should not be seen as a referendum on the royal baby.

How the British elections could impact America (Vocativ)
U.K. general election: stakes are high as Britain votes (The Guardian)