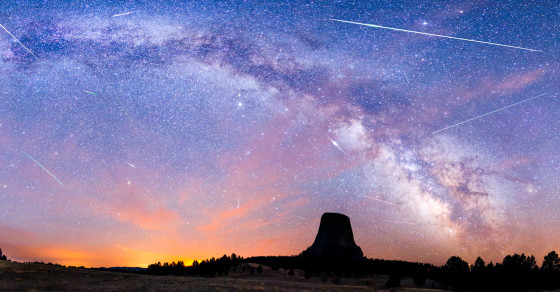 Everything You Need To Watch The Eta Aquarid Meteor Shower

In the pre-dawn hours of May 6, the southern hemisphere will get to see a show: the 2015 Eta Aquarid meteor shower—a result of Earth passing through debris left behind by the retrograde orbit of Halley’s Comet. According to Earth Sky, the luckiest viewers could see up to 40 shooting stars per hour, with observers north of the equator generally getting between 10 and 20 meteors hourly.

More Click To See What The World Is Sharing Of The Eta Aquarid Meteor Shower—Things Start To Get Interesting Around 3:00am ET, And Into The Morning

There may be viewing problems for some people, though. The moon is currently in the waning gibbous phase (read: bright!), which means it could interfere with the ability to see the shower.

Fortunately, for those people in areas that won’t have a good view, or who live in cities where light pollution spoils the ability to witness a sight like this, Vocativ will be publishing a Social Map, pulling in images of the shower from people watching it around the world and sharing their experiences on social media. Vocativ’s Social Map coverage of the meteor shower will begin at 8 p.m. E.T.; be sure to check back in then and follow the shower through its peak.