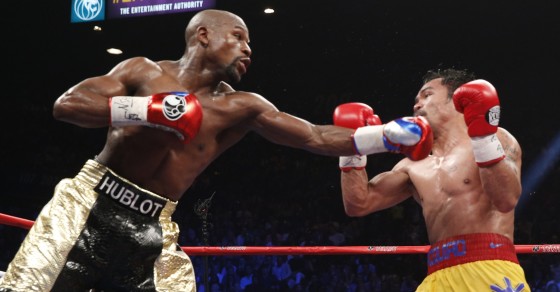 The Prime Minister of Cambodia is so upset that Floyd Mayweather Jr. won the highly anticipated fight against Manny Pacquiao on Saturday night that he has refused to pay up on the $5,000 wager he lost on Pacquiao. Prime Minister Hun Sen claimed that the only reason the undefeated Mayweather won the welterweight boxing match was because it was fought on American soil in front of biased judges, reported The Cambodian Daily.

The Prime Minister presented his disdain over the fight in his speech at a ground breaking ceremony in the Pursat Province in Cambodia. He said that he won’t pay the bet in protest of the decision until the judges explain their decision, as he believes that it was the Filipino boxer who really won the fight because he threw way more punches than his opponent. He didn’t, however, seem interested in the fact that Pacquiao landed a mere 81 punches compared to Mayweather’s 148.

Hun Sen didn’t share any specific details about his bet, but as the Financial Times pointed out that the publicity surrounding the leader’s bet was surprising given that it is illegal for Cambodians to gamble.

Cambodian PM Goes For Mouth Over Money After Pacquiao Loss (The Financial Times)
Vegas Prices Will Knock You Out, Thanks To Mayweather And Pacquiao (Vocativ)