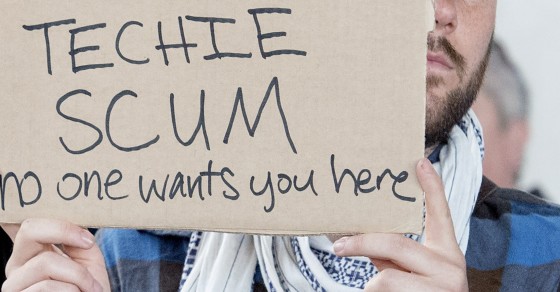 Protesters Say “Block The Tech Commute” Was A Bust

A May Day protest intended to shut down the shuttle system that transports employees for tech companies like Facebook, Apple and Google from the Bay Area to their offices in Silicon Valley was a bit of a flop, according to several accounts of the rally. It may have something to do with the fact that organizers listed the protest on Facebook more than a week ago — giving the tech companies plenty of time to set up new routes, which they did. They even had police escorts.

Protesters had planned to disrupt the commute to draw attention to the “unprecedented wave of gentrification” in several Oakland neighborhoods where low-income families and minorities have lived but that are now being “colonized” by the rich, according to the organizers. They blame tech companies for the demographic shift.

“Their tech buses, their pricey cafes, and their luxury apartments have begun to appear with alarming frequency,” organizers posted on a Facebook page titled “Block the Tech Commute.”

“Let them know that they are not welcome, that their high-priced world is not welcome, and their terrible world of surveillance and alienation must end. Bring all of your creativity, joy and anger to the streets. Together, we can deliver a clear and undeniable message.“

The message seems to have missed its mark—because of the advanced notice, particularly the one posted on the website of one of the companies the protestors were planning to disrupt, the tech companies appear to have had enough advance notice to make alternative plans.

There were a number of other May Day demonstrations throughout the Bay Area Friday, protesting everything from police brutality to work conditions for union laborers, and many of those were more successful than Block the Tech Commute.

A similar attempt to disrupt the tech shuttles in August 2014 was slightly more successful—police were called to remove protestors from blocking the shuttles.