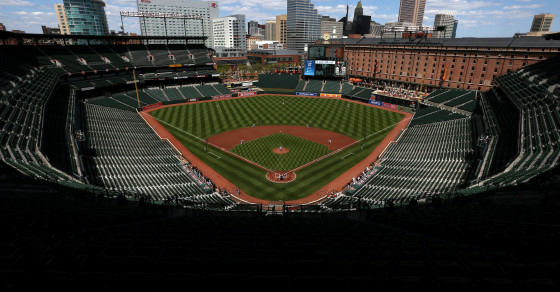 The Baltimore Orioles didn’t allow any fans into its game Wednesday against the Chicago White Sox, but tens of thousands of them checked-in at the stadium anyways.

As a show of support for the city, which has been wracked by protest and violence, fans have been checking-in on Facebook at Camden Yards a rate of roughly 200 per minute since the game began at 2 p.m.

“Why not check in at Oriole Park at Camden Yards? Let them know we are there in spirt,” Maryland resident Linda Vine posted on Twitter. Another Orioles fan, Rhonda Jester, wrote: “The stadium may be empty, but our hearts aren’t. Check-In in spirit! Go O’s!”

After consulting with the City of Baltimore and Major League Baseball, the team decided to play the game Wednesday but not to allow fans into the stadium—out of concern for fan and player safety. So far this week, some 250 people have been arrested and almost 150 cars have been burned in the protests in Baltimore over the death of Freddie Gray, whose spine was severed while in police custody.

Number of "check ins" at Camden Yards at 2:45 p.m. Wednesday

Number of "check ins" at Camden Yards at 3:45 pm Wednesday