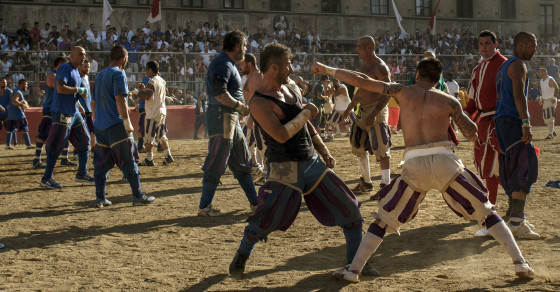 Florence’s Barbaric Version of Soccer Is the Original Extreme Sport 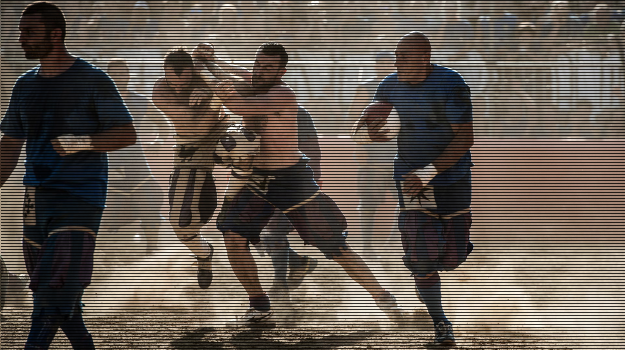 Florence, Italy, is largely regarded as the cradle of the Renaissance. And while the city is best known for its artistic contributions to the world, few are aware that it is also the birthplace of soccer. However, the soccer of 15th-century Florence was rather barbaric in nature. They called it calcio storico, and despite the bloodshed it incurs, locals still play it to this day.

The Romans originally invented a sport they referred to as harpastum to keep their warriors in shape. Then men in Florence revived the game in 59 B.C. and eventually started calling it calcio, a word meaning “to kick” in Italian. The premise of calcio storico is somewhat similar to modern-day soccer. The men compete on a square-shaped field, running around in an attempt to throw the ball into the designated goals. The rules, however, are a different story. The 27 players on each team are free to use Greco-Roman combat moves, tackle opponents rugby-style and even box one another on the field. None of these acts are considered fouls.

Vocativ took a trip to Florence to speak to a few men who are actively involved in calcio storico. As the city is divided into four neighborhoods, each quarter has its own representative team in the league. “It’s a great honor when you show up in the square and there are more than 7,000 fans watching,” says Simone Brogliardi, a player for the blue team. “You feel like a gladiator entering the arena and ready to fight.”

But the honor does not come without a price. In fact, Alessandro “Ciara” Franceschi, the coach for the red team, says the game is brutal for players. “Violence is an inherent part of this game,” he says. “It’s really a war game; out of 27 teammates, at least 10 or 15 are going to come out injured.”

Franceschi has seen players hide their injuries—broken ribs and hands—to finish a match. Because calcio storico is the most ancient tradition of Florence with a history of more than 2,000 years, players risk it all for the sake of honor.

“Calcianti are athletes, strong athletes, courageous athletes, because the game is very masculine, very tough,” explains Luciano Artusi, director of calcio storico. “It evokes the meeting points of the Middle Ages and the Renaissance: toughness, chivalry and willingness to proudly demonstrate that you belong to the city of Florence.”

After the match, the winning team is treated to a simple banquet in their neighborhood. They do not get paid for their participation in the bloodsport.